A quote: Yesterday is not ours to recover, but tomorrow is ours to win or lose.

Lately, I have been feeling stuck in a strange middle ground. Between being undocumented and being a resident. I am one of those DACA ‘dreamers’ that the news keep talking about. Except I’m a black one. One of the black ones. I started this blog to help myself talk about the things that I’ve internalized and kept secret. It would be remiss to not address the elephant in the room. Maybe you are also one of them. Well, us.

I was somewhat arrogant in thinking that I could run away from the experiences that I struggled through during the time I was undocumented from 2000 to 2013 (high school until after college). As the administration changed, from Mr Obama, I began to rediscovering a sort of immigrant angst. I feel myself backsliding. I had forgotten about the fear, the worry, the general feeling of unease. This land of opportunity, damped from years of isolation, salvaged by cultural and familial ties. I find myself asking, was it worth it? This American dream.

I didn’t fully appreciate being undocumented until I got to college. Then the secret changed from a quiet, internal and mostly dormant thing, to roadblocks and walls. And I felt every one. I would be shut out of the job market and most career opportunities for most of my adult life. It was like carrying a giant weight and constantly being afraid of being deported if anyone was to discover/report you. Sounds intense and dramatic. An illegal person. Now, a former illegal person, not legal but not illegal, like betting on the Superbowl, which is illegal.

Those feelings stayed. I remember them even after DACA. And I want to get over them. But I cannot pretend as though they haven’t been hanging around in the background. I can feel them there. I try not to think about being shut out of my own college experience. I try not to think about going through the motions of going to classes, passing and then mostly going home. Thinking about that time depresses me. It bothered me that I couldn’t be more sociable. I was afraid to speak to people. I hated the verbal dance in conversations and the feeling of always being aware that you had this secret that you had to protect. That you were undocumented. Illegal.

You would have to explain to people why you didn’t have a job, why you didn’t want to go to a club (ID), why you weren’t going for internships or doing more as a future doctor. Sure, the answers may have been believable, but after six years of dodging the many things that immigration affects, I realize that the questions may have been nothing to the people around me but it was my entire world. I was always hyper aware in social settings, cautious about hiding the truth. And then I was also hiding my attraction to men. It was constricting. I didn’t make any friends or join any organizations. I stayed a loner, even though that’s not who I was. Honestly, I felt like a bit of a loser in college. I know that sounds harsh but I really did.

It was sheer embarrassment when I was called out on my status. And it always happened to me when there was a room full of people. Always in the Bursar’s, surrounded by many students that I knew, “Sir, why don’t you have a social?” Look woman, I didn’t have one last week when you saw me and I didn’t pick one up this week either. We both know that I’m student ID-ing this bitch. Or in the registrar, “If you are not here legally, you need to write a letter before we can submit that form”. I grew familiar with the tingle in my spine, the cold sweat, the flushed face. The shame.

I took it in stride when Professor Govind smirked in the genetics lab on the sixth floor “Why aren’t you in the program? You will be paid. you can get more than credits.” I can’t. “Well, you’re not illegal are you?” Can we speak outside? “You know there are other ways to migrate right?” Bitch, you know the people behind you can hear you right?

What else could I do but step to the side, when I was denied entrance to the school by a Yzma-like troll in peach

church shoes that strapped up to her shins. Apparently, I didn’t have enough documentation to get a new college ID. So, she asked for my passport. She ruffled through the pages and asked, “Where is your I-94”. I said, “I don’t have it yet.” She said I was out of protocol, I wouldn’t be able to get a new ID card.” But, I had already paid for the semester. How could I know what was happening internally as I stood in the immigrant center waiting for them to work it out? It took 3 days to get a new college ID. I was told that I shouldn’t lose it since it would be difficult to replace.

What else could I do but act naive to the condescension of being schooled time and time again? Being told what I ought to be doing. Not being able to say, I can’t take those opportunities/I can’t go on that trip/I can’t join that organization/I can’t be a part of that program. I was embarrassed and stripped naked in many rooms across campus. Metaphorically! Over 6 years.

It subdues and pacifies you. You become quieter. You try not to attract attention. I wish I was strong enough to say it never broke me. But I know I internalized it. And it is a process to get it out. I know it still affects the way I see the world today.

How do I let go of six years of internalized conflict at college and after? So many instances of hurt, embarrassment, oppression, regret and fear. Will it ever go away?

I don’t feel free of my past. I don’t feel free. DACA is not the freedom that I thought it was. It feels like a different sort of survival mode. But it stands in the way of actualizing myself. And still I feel like I am supposed to be grateful for being able to work. And yet, it isn’t enough. (Do I sound like a spoiled millennial?) It is more than many people have. More than people who are truly in the shadows. I know that there are many people who don’t have access to the jobs and resources that social security numbers provide. I feel perplexed that I still feel burdened. Being grateful is not enough to live. Surviving is not living. I feel the burden of an invisible weight. Why do I feel like a whiner saying so? 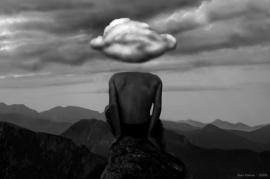 And then Trump. And then Pelosi. And congress. I feel unsettled with DACA always on the news and reports about deportations. I don’t like this feeling. It reminds me of the past. I told a friend that I have been in the US long enough to have become disillusioned. I told her that I don’t care where the cards fall, as long as they do. But a part of me knows that’s a facade. How do you answer someone saying they don’t want you in their country except to say, I don’t mind leaving. But I do. And I’m unsettled. Its brought back feelings that I pretend to forget.

After 13 years of being undocumented, and 4 years under DACA, I am having a hard time getting out of survival mode and finding my path. I feel like I spent so long focused on being undocumented, and not deported. Then, with DACA, I spent it trying to compensate, $bank$ and get my life moving. Now, four years later, I finally find myself asking, where do you see yourself. And the answer keeps changing.

I know I should be grateful that I can even attempt this journey and that there are opportunities in spite of the restrictions. Even if its only in theory at first. There are supposed to be millions of undocumented/DACA people out there somewhere in the void. I am not interested in a debate over borders and laws. You can have that on CNN. I dedicate this post to our continued struggle. Take care of yourselves and look kindly on your experiences. Even as I struggle to look kindly on my own past, and not judge myself for where I’ve been. Know that I feel your struggle and you are never alone in that fight. I care about you.